This is my second Best-Of post, the first being from December, 2012.  This year's set contains 15 images, all but one shot in the first half of the year.  As with last year, the number could have been higher or lower, it just happened to be the number I truly liked.  Unlike last year, I won't post all of them, but will only comment on the POTY and the runner up.  The entire set is viewable in my Flickr feed by clicking here.

The POTY, Drive Thru, was shot in Wynwood on my return from my studio at the Bakehouse.  I was stopped at a light and just raised the camera and snapped off a shot.  Composition and tonality are the two things I like most in photography and the reason I shoot predominantly in black & white. This image has it all.  The sign on the extreme right third of the image tells you exactly where you are and acts as a counterpoint to the subjects on the left.  The left-side is lighted nearer the bottom whereas the right-side is lighted from where the left-side leave off all the way to the top.

The people in the image, though, complete the photo.  They are illuminated by the store and almost organically a part of the image.  Because of the tonality, the interplay between light and shadow and the presence of people engaged in ordinary tasks, this photo has always reminded me of an Edward Hopper painting, albeit in black & white. 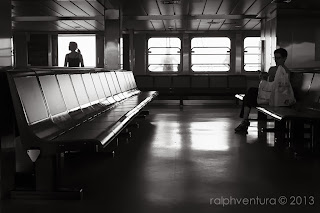 My second favorite also has a Hopper quality to it.  This photo was shot on the Staten Island Ferry in June of this year. The placement of the three subjects (you do see the third woman in the middle, don't you?) almost in equally spaced thirds, how they're not interacting but seem lost in their own worlds, and the diagonal of the empty seats make for excellent composition. Add to this the tonality, and there you have my reasons for loving this photo.

Posted by Ralph Ventura at 1:06 PM