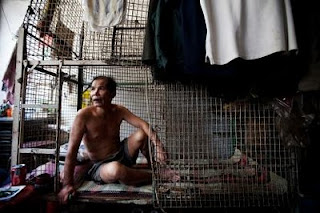 Alex Thomas has a very interesting piece in FotoEvidence, a site dedicated to exposing injustices through the medium of photojournalism.  His article discusses "cage homes" in Hong Kong.  According to the piece, landlords took apartment buildings and gutted the interiors in order to fill them floor-to-ceiling with pens, or cages, to rent out to newly arrived immigrant workers.  Although more prevalent at the beginning and middle of the 20th Century, these apartments still exist today.  The photos are pretty impressive.

The piece is definitely worth a read.  Click here for the entire article.
Posted by Ralph Ventura at 10:18 AM No comments:

The Battle of Madison 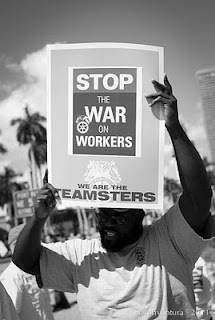 Thirty years after President Reagan broke the back of the PATCO union, the country is again embroiled in a passionate struggle, some say life-and-death struggle, over the future of unionization.  Over 30,000 protesters have taken to the streets in Madison, Wisconsin to protest Governor Scott Walker's proposal to strip public employees of their collective bargaining rights.  This has been known in the media as the Battle of Madison, read here and here,

This struggle has seized the imagination of the country as unions across the country demonstrate against the further erosion of their collective bargaining rights.  The demonstrations came to Miami yesterday, well at least what passes for union demonstrations in this very anti-union state and in a city known for its political apathy.

Approximately 300 people (my very rough estimate) demonstrated at the Torch of Friendship in Bayfront Park, just across from Downtown Miami.  What they lacked in numbers, however, they made up for in earnest passion.  Dismayed and angry at the sense that they are facing a full assault in several different states, the workers and organizers gathered to express their solidarity with workers in Wisconsin.

The gallery is definitely worth a look.  Click to see the full gallery.
Posted by Ralph Ventura at 2:04 PM No comments:

New York in the Snow 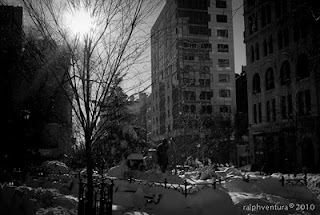 This past December, my daughter and I left for our annual and possibly last (she'll be 18 soon) trip to New York for the New Year's Holiday.  We heard it would snow during our stay; we didn't expect a Snowpocalypse.

After an hour in a holding pattern, during which the tower decided whether to divert us to Kennedy, we finally landed in La Guardia with the snow already falling.  It turns out we caught one of the last flights into New York just before the snow hit. Soon after we landed, the airlines started canceling flights and stranding passengers.