Leica M-E, getting some love.  Couldn't resist.  Can't tell if the lens is a 50 Summicron, but sure looks just like mine.
Posted by Ralph Ventura at 4:15 PM No comments:

Two Silhouettes and a Smile 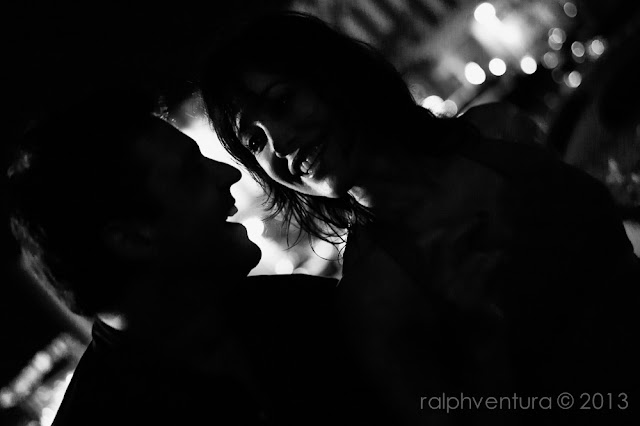 Much of what passes for black & white photography nowadays actually looks like color photography that has been amped in Photoshop and converted to B&W.  I suppose this stems from most B&W originating in digital cameras, almost all of which are equipped with color sensors.  Most users have come to photography by converting to color and have never really developed a B&W aesthetic.  In their minds, I suppose, B&W is nothing other than color images without the color.  When I can see everything in a B&W image in a heightened, super-realistic sort of way, it just creeps me out because it simply doesn't look right.  Real B&W is as much about the shadows as it is about the lights, as much about what you can't see as what you can.

A few weeks ago I attended an outdoor party with friends.  The lighting was atrocious and, even more importantly, it illuminated the scene from the wrong direction.  Anyway, I managed to capture this image of a couple at the party and got just enough illumination on the woman's face to make the image useful.  I don't like that the highlight on her chin is clipped, but considering this was shot at ISO2500 and pushed two stops in Lightroom, I think it's the best that can be hoped for.

I really like the image anyway, though.  You can see in it a couple that appears genuinely happy with each other even though you can't actually make out much else in the image except two silhouettes and a smile.  IMHO, this is what B&W is all about.
Posted by Ralph Ventura at 9:03 PM 1 comment: