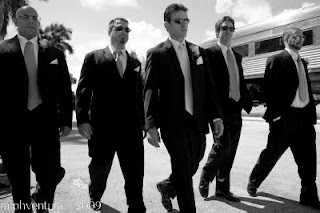 It's the bride's day. From the flowers to the cake to the limo, the entire day should speak of and to her. A wedding that does this , and the photography of that wedding, is pretty much considered a success.  Still, in all truth the bride is but one half of the wedding. This raises the question, What to do with the groom?
I've tried a variety of shots but none has the visual presence of the "Reservoir Dogs" shot.  For those who are not fans, Reservoir Dogs is Quentin Tarantino's first film as a writer and director.  It premiered at the Sundance Film Festival in January, 1992 and instantly made Tarantino's career. Two years later he followed his success with Pulp Fiction, to this day my favorite Tarantino film, but that's an article for a different blog.
Read more »
Posted by Ralph Ventura at 7:39 PM No comments: