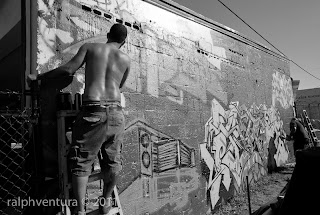 Following up my previous post on Graffiti Art in Wynwood,  during our stop in Wynwood Jackie and stumbled across a tagging party.   Two guys were doing the tagging, with some others hanging out by the cars, in the rear with the bear.  The kids were very cool and let themselves be photographed.

I don't know if they had the owner's permission.  Graffiti abounds in Wynwood.  Not all of it can be "illegal".  The work is beautiful. Surely some of it, maybe most of it, is done under commission by the building owners.  Still, I didn't photograph their faces, just to be careful.

Graffiti is fraught with such controversy given its origins in the streets, its association with African American and Hispanic culture and wholly unfair association with gang life. Many people don't consider it an art at all but merely a form of vandalism.   The vandalism aspect of this is almost beside the point, actually.  It confuses the act of graffiti with permission to create the art in the first place.  I suppose if Micheal Angelo had painted the Sistine Chapel without the Pope's permission it would technically be considered graffiti vandalism, but it would still be his masterpiece on the Sistine Chapel.  The art deserves to be measured on its own value regardless of whether the artist had permission in the first place.  As art, much of it is beautiful.  This beauty abounds in Wynwood.

Click here to read a great article on Graffiti.

Click here to view the rest of the gallery in my Flickr feed.
Posted by Ralph Ventura at 8:18 AM No comments: 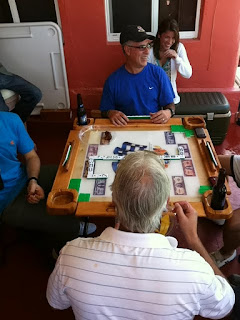 Posted from iPhone.  Dominos at the Reyes residence, Nochebuena, 2011.  Felicidades.
Posted by Ralph Ventura at 9:11 AM No comments:

New York in the Shadows 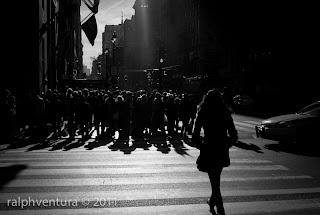 Walking through New York with my M8 swinging off my side I wondered what would happen if I cranked the aperture all the way up to f/16 and shot into the sun.  The results are fascinating.  Only the surfaces bathed in sunlight are visible, everything else is a shadow.  Of course this would have been different had I shot with the sun at my back but that would have defeated the purpose.  The images reveal a New York of of long shadows and silhouetted figures.

Go to my Flickr page to view the entire gallery New York in the Shadows.

Posted by Ralph Ventura at 7:47 AM No comments:

After the Wynwood Art Fair, Jackie and I drove around looking for something else interesting to photograph when she spotted the Batman tags on a wall.

Since I already had a photo of a Captain America she suggested I photograph this.  Well, it turned into an urban photo safari and a great encounter with some taggers as well.

Photos of the tags can be found in my gallery on Flickr called Graffiti Art in Wynwood.  More on the taggers next time.

Posted by Ralph Ventura at 7:28 AM No comments:

Wynwood had its pre-Basel party in October with its Art Festival.  Typical of Wynwood, though, this was very much a participatory event.  You could even say that the Festival was, by itself, a piece of performance art.

Billowing clouds of dry ice embrace you as you walk in and are immediately a bunch of dancers, a kid doing an old-style break dance and a Celia Cruz lookalike.

The entire set can be viewed in my Wynwood Arts Festival Gallery on Flickr.

Posted by Ralph Ventura at 6:44 PM No comments:

Adjacent to Ground Zero, St. Paul's Chapel miraculously survived the blast that leveled the twin towers and forever changed our lives.  After September 11, St. Paul's ministered to the workers at Ground Zero, what they called "The Pile."  During this time thousands of visitors from around the world transformed the wrought iron fence surrounding St. Paul's Chapel into a spontaneous memorial.  They left many different items that held significant personal meaning.  By the time the 9/11 ministry ended at St. Paul's, the items filled 250 boxes.

The items are at once both heartwarming and sad. There is the banner from Oklahoma City professing its support and love for New York.  You can't see that and not be moved.  There are also many, many photos of the fallen and the missing.  Some firefighters, others police officers, still other just civilians like myself, mementos of lives cut short by madmen and by "politics by other means".  You can't look at photos of the dead and the missing without being moved to tears.

Click here to see the remaining photos on my Flickr page.
Posted by Ralph Ventura at 9:15 PM No comments: