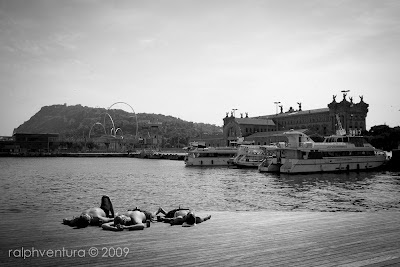 The lazy days of summer are upon us now.  By the time this post is uploaded, I'll be somewhere in Massachusetts taking in the sites and marveling at how cool it is in June compared to Miami.

In Miami we sort of take for granted warm weather, but also tend to shy away from the open sun during the summer, except if actually at the beach.  The photo at right was taken in Barcelona, also during June, in 2009.  While it was warm, Spain is much farther north and so it wasn't as oppressively hot as summertime in Miami.  While strolling the port area on our second day we encountered these three young men (boys?) sunning themselves.

The photo speaks of a languid idyl of summer and youth, a time when all our lives are ahead of us and the world seems warm and full of possibilities.  I love the photo of these three youths.  I love how the yacht and the building (a mansion?  a hotel?) lie beyond them with the mountain even beyond that and how they are separated from these things by a body of water, as if separated from their futures by a gulf of time.  The possibilities are out there, but they're just kicking back, reveling in their youth and enjoying the summer.  There will be time enough for those things someday.
Posted by Ralph Ventura at 9:00 AM No comments: 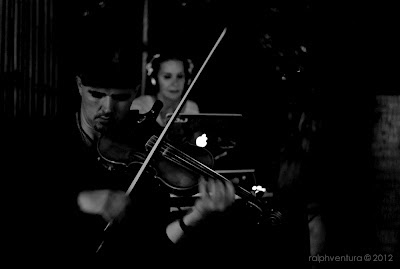 This is really a great time to be an artist (or even just "into" the arts) in Miami because there is just so much going on.  What started as a simple art walk in Coral Gables and a few satellite shows in Wynwood during Art Basel has blossomed into a full-fledged micro economy with artist communities fairly much springing up across the entire county. The Bakehouse (where my studio is located) and ArtCenter/South Florida have been around for decades but the last ten years has brought us several new communities including ArtSouth, the Artisan Lounge and Ironside.

Some artists I know have taken studios in Ironside, which of course has its own art-walk.  As with all the better venues, Ironside has a sort of youthful cool, artiste feel to it all set in an industrial park.  Tre chic.

As we were leaving, Ironside I came across this violinist and shot the image in near darkness.  I like the image, even if it's not terribly sharp, maybe because it's not terribly.  Still, considering the lighting, I'm lucky I got anything useful from it at.
Posted by Ralph Ventura at 9:00 AM No comments: 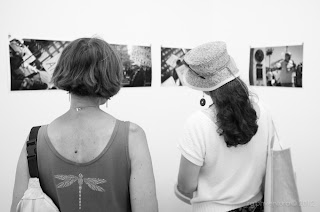 In late April I was accepted as a resident artist at the Bakehouse Art Complex, a non-profit residency of studios, galleries and work areas for emerging and mid-career artists. This is a huge honor as the acceptance process is very selective. I know many of the current and former BAC artists and feel truly humbled to be included in their number.
I was accepted just in time for the last event of the season so was able only to host a small, impromptu reception. I've posted photos of the reception on my Flickr feed. Given the short time frame, I featured selected photos from Mermaids!, Alone in a Sea of People, and Soapbox. I also featured selected photos from The Dispossessed. None of these has ever before been exhibited.
Each of these will be the subject of its own show, after the season begins anew in September with a grand opening. The September show, however, will feature Caution Tape, a series examining fear and feminine identity. Please keep an eye out for emails from me announcing new exhibits. I hope to see each of you there.
Posted by Ralph Ventura at 7:28 PM No comments:

The Struggle for Meaning

I've been wanting to write about this image for a while now, but embarrassingly really didn't know what to say, words just escaped me.  It's an image that attracts me, but strictly in a right-brain, mute sort of way.

I love how the border between the near-black and the sky almost bisects the the image perfectly from the upper left all the way down to the middle third, and then just veers off in a slight jog upwards.  I love how the sun suggests itself from the slant but doesn't overwhelm the image.  In print, but probably not on a computer monitor, you can make out vague suggestions of rectangular tiles in the black, lower portion of the image providing a rigid, grid-like counterpoint to the clouds in the upper half. The image speaks to me on many different levels, just not a verbal one.

The viewer, though, may be left with the question, "What is it?" To my mind, it reminds me of the monoliths from 2001: A Space Odyssey, and thus the image's title.  Others, especially the younger set who may not have seen the film, may not draw the same initial comparison.  Again, messages on different levels.